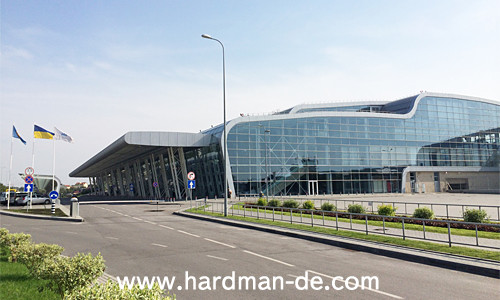 With the city of Lviv preparing for the Euro 2012 European Football Championship, officials commissioned a renovation and expansion of the Lviv airport: A new paasenger terminal, control center, and support facilities; renovations to the main air terminal building; and a reconstruction and extension of the full-strength pavement (FSB) on the facility’s runways.

Builders Transbud and Atlis Holding, with less than six months to complete the work, turned to Hardman couplers for the necessary reinforcement on the project - their first experience with mechanical coupling after using welding methods on previous projects.

The two companies went on to use Hardman’s mechanical coupler technology in their next joint project.

- Reduced consumption of reinforcement bars
- Reduces electricity cosumption
- Easy control of the final connection
- Replacement equipment and couplings available
24 hours a day
- Environmentally friendly
- Less noise
- We are cheaper, but this is not the point...
our quality and reliability is the real value.

We organize our work worldwide. It includes:

Please specify the time period for the delivery in your region.